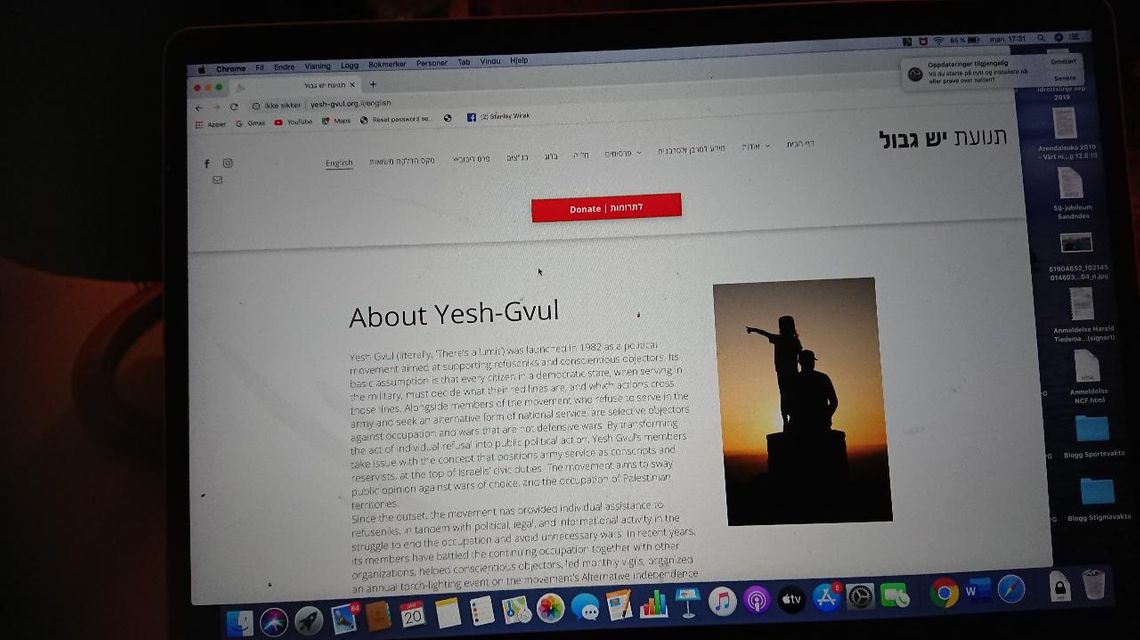 On The Need to Avoid One-Sided Policies


We, candidates for service and soldiers in the IDF, men and women, as responsible citizens, hereby declare that we will take no part in the continued oppression of the Palestinian people in the occupied territories, and we will not participate in policing actions or in guarding the settlements.

Dear friends
Our message to you may not be popular in Israel. In fact, it is not even the explicit message of all Israeli Peace groups! However, we strongly believe that Israelis and people abroad (especially European decision makers) should hear us, and that this is in the best interest of Israelis and Palestinians.

First, we believe that the conflict in the Middle East should be addressed from a human rights perspective, not a nationalist perspective. We denounce all acts of terrorism, attacks on civilians, expropriation and repression. The aforementioned principles should be obvious.
However, we also believe that the main obstacle to a peaceful coexistence between Israelis and their neighbors is the ongoing Israeli occupation of millions of human beings in the west bank and Gaza strip. This too should be obvious, but unfortunately, some North American and European decision makers have been acting as if this is not the case.
As Israeli citizens we emphasize our objection to the occupation by refusing to take part in it as soldiers, and by supporting selective sanctions against those who profit from it. We also believe that senior officials everywhere should be held accountable for war crimes committed by their armies or militias. The Israeli government has accused, indicted or executed (without trial) thousands of Palestinians or other inhabitants of the middle East, claiming they were terrorists. In some cases, the allegations were correct. However, the Israeli government has failed to indict even a single senior official for war crimes !
Since there is consistent evidence suggesting that war crimes are being committed on an almost daily basis by the Israeli government and the ID, we, as Israeli citizens, are obliged to act and promote the administration of justice. Our task is not easy, but how can one have lasting peace without accountability for war crimes?
We call on you to assist us in our campaign. It takes courage to face accusations of "Antisemitism", hurled at our friends abroad, but we believe that Israeli dissidents are the ones who will save Israel from itself.
In order to change the dismal reality of the Middle East and Israel/Palestine, Israeli dissidents must rely on your support, as friends of our state and champions of true peace!
Peace / Salam / Shalom/ Paix
Ofer Neiman
Peretz Kidron
Yesh Gvul

Yesh Gvul - Background
Yesh Gvul ("There is a limit !") is an Israeli peace group campaigning against the occupation by backing soldiers who refuse duties of a repressive or aggressive nature. The brutal role of the Israeli army in subjugating the Palestinian population places numerous servicemen in a grave moral and political dilemma, as they are required to enforce policies they deem illegal, immoral and ultimately harmful to Israeli interests. The army hierarchy demands compliance, but many soldiers, whether conscripts or reservists, find that they cannot in good conscience obey the orders of their superiors.
Yesh Gvul arose in response to the 1982 Israeli invasion of Lebanon, as growing numbers of soldiers grasped that the campaign, with its bloodshed and havoc, was an act of naked and futile aggression in which they wanted no part.
168 servicemen were jailed, some repeatedly, for refusing to serve in the campaign: the actual number of refusals was far greater, but their rising numbers deterred the army from prosecuting most of the refuseniks. The first Palestinian intifada in 1987 likewise prompted further refusals, with close on 200 jailed, though the army again backed down from jailing many of the recalcitrant soldiers, indicating that refusals were significantly more numerous. A notably high ratio of refuseniks are combat officers (ranking from sergeant to major) i.e. soldiers who have served with distinction.
From the outset, Yesh Gvul has fostered the refusal movement. Defying official intimidation - including close surveillance by police and security services - we counsel soldiers wrestling with the painful choice between serving policies they find abhorrent, or defying military discipline. Those who elect to refuse get our full moral and material backing, ranging from financial support for families of jailed refuseniks, to vigils at the military prisons where they were held. Whenever a refusenik is jailed, we bring his protest to the public notice, as a model for the broader peace movement, and for other soldiers in a similar dilemma.
Yesh Gvul is a small group with limited resources, human and financial. But the unique thrust of its campaign has galvanized the broader peace movement, inspiring it with the moral example set by individuals prepared to suffer for their convictions. Some peace movements confine themselves to verbal protest, balking at refusal and its direct challenge to authority. But Yesh Gvul rejects the "shoot-and-cry" syndrome; its own slogan advocates action: "We don't shoot, we don't cry, and we don't serve in the occupied territories !" - setting the group in the vanguard of the Israeli peace movement.
Yesh Gvul supports some BDS (boycott, divestment, sanctions) measures against Israel's human rights violations, since the Israeli establishmant is reluctant to respect human rights without outside pressure.